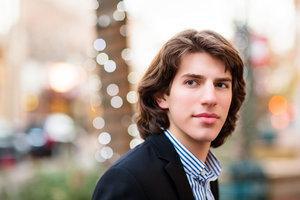 “A gifted virtuoso…brought out transparency and emotional intensity with tender aplomb. Finger-busting writing seemed not to daunt him in the slightest.” SAN FRANCISCO CHRONICLE

“Poetic, electrifying,” “mesmerizing artistry and extraordinary ability to communicate,” “masterful technique,” “exquisite lyricism,” “a gifted virtuoso,” have lauded 21-year-old Llewellyn Sanchez-Werner for performances that have stirred the intellect and humanity of his audiences on five continents. His unique and multi-faceted artistry has been featured on NPR, CNN International, the Wall Street Journal, and WDR-Arte. Named a Gilmore Young Artist, an honor awarded every two years highlighting the most promising American pianists of the new generation, it held deep meaning for him to perform at the White House and Kennedy Center for President Obama’s second Inauguration concert.

A Gilmore Young Artist award winner and the only candidate selected for 2018’s Yale School of Music’s prestigious Artist Diploma program. Witness the energy and artistry of this prodigy on our intimate stage.

Llewelyn also has been recognized for his humanitarian efforts. General Petraeus commended Mr. Sanchez-Werner’s “courageous humanitarian contributions through the arts…strengthening the ties that unite our nations.” He received the Atlantic Council Young Global Citizen Award recognizing his dedication to social action through music in such countries as Iraq, Rwanda, France, Canada, and the United States. Fellow honorees included Robert De Niro, Presidents Enrique Peña Nieto and Petro Poroshenko, and Prime Ministers Shimon Peres and Lee Kuan Yew. On UN World Day for Cultural Diversity he played with the Iraqi National Symphony in Baghdad, raising funds for the Children’s Cancer Hospital, and in Rwanda, he performed for economic leaders and President Kagame as Rwandans continue rebuilding from the Tutsi genocide. He augmented awareness when he was featured on CNN International. In Paris, he performed at the U.S. Embassy for a special event honoring the visit of the U.S. State Department’s Special Envoy to Muslim Communities, Shaarik Zafar, which was attended by an American delegation and local representatives from various religious groups and civil society advocates.

Tickets may be purchased for General Admission and Student Admission and both are welcome to attend a complimentary reception following the performance.