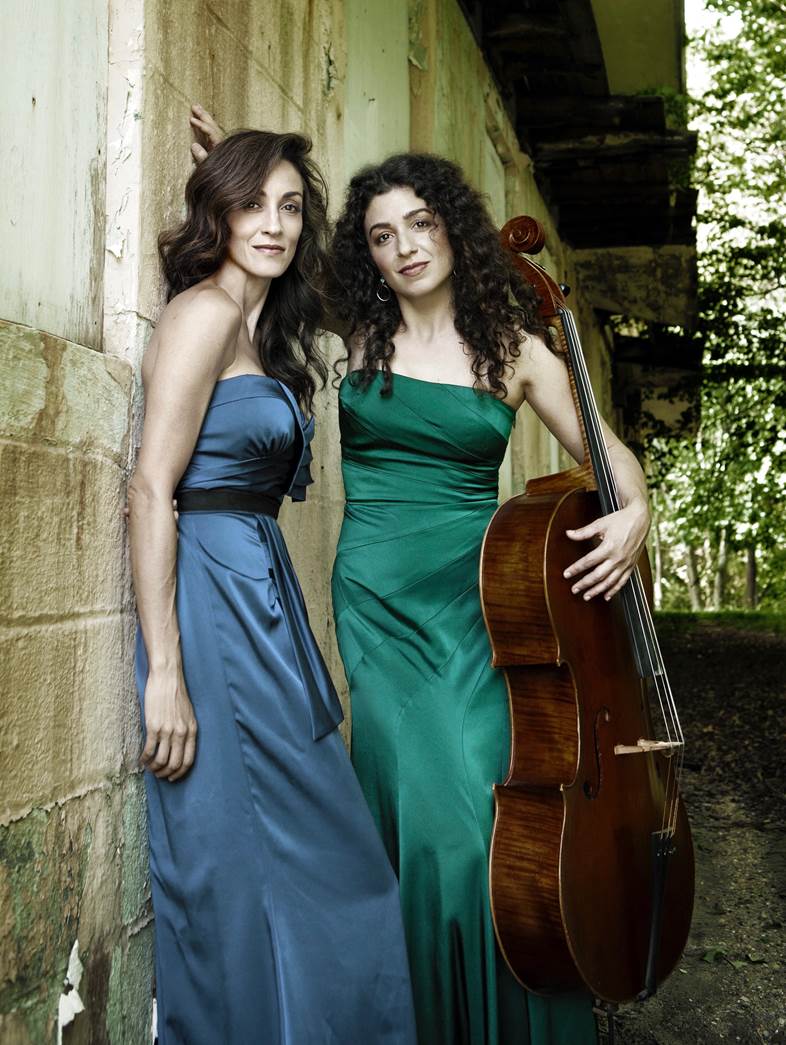 In a piano and cello performance, these world-renowned, award-wining musicians and sisters return to their childhood home of Barrington, Illinois to share their amazing musical gifts together at Barrington’s White House. The performance by Marta and Ani Aznavoorian will take place on Saturday, December 16, at 7:30 pm.  Tickets are $40 for adults and $20 for students.
Tickets Available Here

Performing throughout the U.S. and across the globe, both are in demand worldwide as chamber musicians and soloists. As well, pianist Marta is a founding member of the Grammy award-winning Lincoln Trio, called “one of the hottest young trios in the business.” Ani is the principal cellist of Camerata Pacifica and is described as having “scorchingly committed performances that wring every last drop of emotion out of the music.” Recently hailed by the Los Angeles Times as a “cellist who shows great sensitivity and great virtuosity at all moments,” Ms. Ani Aznavoorian is in demand as a soloist and chamber musician with some of the world’s most recognized ensembles. She has appeared with many of the world’s leading orchestras including the Chicago Symphony Orchestra, the Boston Pops, the Tokyo Philharmonic, the Helsinki Philharmonic, the Finnish Radio Symphony, the International Sejong Soloists, the Indianapolis Philharmonic, the San Jose Symphony, the Juilliard Orchestra, Concertante di Chicago, and the Edmonton Symphony. Ms. Aznavoorian has also appeared as recitalist and chamber musician throughout the United States, Italy, France, Finland, Yugoslavia, Japan, Korea, Australia, Taiwan, and Canada. This season marks Ms. Aznavoorian’s fourth year as principal cellist of Camerata Pacifica. In addition, she has been a member of the distinguished music faculty at the University of Illinois in Champaign/Urbana. In the summers she is on the faculty of the Great Mountains Music Festival and School in South Korea. Marta Aznavoorian has performed to critical acclaim throughout the world as orchestral soloist, recitalist and chamber musician. A Chicago native, she has performed in her hometown’s most prestigious venues and tours extensively throughout the world. She made her professional debut at the age of 13 performing Mozart Piano Concerto No. 24 in C minor K.491 with the Chicago Symphony Orchestra at Symphony Center in four concerts of their series. She has won over audiences appearing as soloist with orchestras internationally including the Sydney Symphony Orchestra, the Sydney Conservatory Orchestra, Chicago Symphony, Chicago Civic Orchestra, Aspen Festival Orchestra, San Angelo Symphony, San Diego Symphony, Northwest Indiana Symphony, and the New World Symphony which resulted from a personal invitation from Michael Tilson Thomas who also was her conductor. Aznavoorian has worked with such renowned conductors such as the Late Sir George Solti, Michael Tilson Thomas, Lukas Foss, Henry Mazer, Francesco Milioto, Kirk Muspratt among others. She has won numerous awards throughout her life, including top prize in the Stravinsky International Competition where she was also lauded the special prize for best interpretation for the commissioned contemporary work. As a recipient of the 1990 Level 1 award in the National Foundation for the Arts Recognition and Talent search, Ms. Aznavoorian became a Presidential Scholar and was invited to the White House and to the Kennedy Center in Washington, D.C., to perform as a soloist.