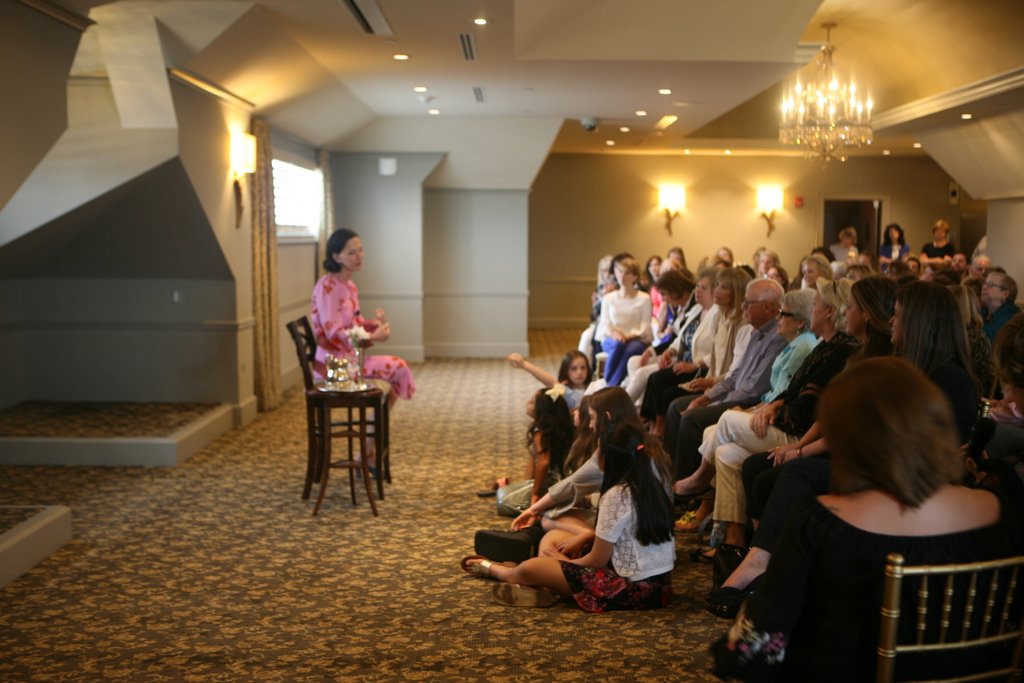 Barrington celebrated Cynthia Rowley’s arrival to her hometown with events from a very popular Cynthia Rowley Pop-Up Shop, to a Welcoming Party, to a Conversation with Cynthia Rowley (which sold out), to a formal fundraising gala kicking off the new Friends of Barrington’s White House 501(c)(3).

During a Conversation with Cynthia Rowley, she encouraged her audience, young and old, to live their dreams. Some in the audience had participated in “Project Rowley,” creating their own fashions displayed at Barrington’s White House. To them, she was most encouraging. “There’s never been a better time and now it’s so easy to put your stuff out there into the world, tell your story, and create a community.” She went on to advise her audience, “If you fail, you fail fast, you move on from your mistakes, and never let anything hold you back. One failure will never bring you totally down and little by little by little your good work will all add up.”

Cynthia summed up her career by saying, “If you love your work and you’re passionate about it and you just want to do it all the time, it will last a lifetime and make you feel enriched and excited in every part of your life. That’s how I feel every day. I’m super-duper lucky all the time.”

Cynthia remembered the era when Neil Armstrong visited Barrington as “the biggest thing to happen to us since the state finals.” Armstrong was to speak at the high school and then host an event at the local country club. Cynthia’s father dusted off the same suit he wore to such occasions, but her mother wanted something new and special. Cynthia and her mom visited the iconic Finn’s Fabrics, owned by Barrington’s Dyllis Braithwaite, for a few yards of a beautiful gold brocade fabric and a Simplicity pattern. Together they made the perfect Jackie Onassis meets Marlo Thomas cocktail gown. (Cynthia reminded the crowd that, fast forward, Simplicity now carries licenses for her designs.)

When asked about travel and how it influences her work, Cynthia expanded on her theory that “travel as an adventure is what opens up your mind to being able to think expansively and be adventurous without being specific to the place you’re going.” She went on to clarify, “Going on a big adventure and doing daring and crazy things makes you more adventurous and daring in your work and in your life.” The Conversation with Cynthia Rowley culminated with a group photo on the front porch of Barrington’s White House with Cynthia surrounded by all inspiring seamstresses who exhibited their own designs in Project Rowley.

The event was moderated by the Cynthia Rowley Event Chair, Linda Hovde, and when the audience asked questions people hung on every word. There was laughter and tears and the event will go down in the history books as one of the most memorable at Barrington’s White House.

The weekend was topped off by a formal gala where women wore beautiful Cynthia Rowley dresses. Dave Nelson took the mike and told stories about Cynthia, who grew up as a neighbor on Liberty Street. Village President Karen Darch gave an impassioned speech and awarded Cynthia with the “keys to Barrington” which brought tears to Cynthia’s eyes as well as the family members surrounding her at her table. Cynthia, dressed in one of her own beautiful gowns, ended her time in Barrington with the following speech:

This is a really huge honor tonight and thank you to everyone here for your support of the White House.
I always love coming home. My parents still live in the home I grew up in which I lovingly call the monument to my idyllic childhood. To some people Barrington might be known as a sleepy little hamlet but to me it’s a place where dreams are made and where creativity is supported in every way. When I was young we put on elaborate plays, of course I created the costumes, at what is now Karen Darch’s playhouse, near my parent’s house. My first pop-up was a card table at side walk sale days when I was eleven. I was selling little halter tops like hot cakes. I’ll never forget building floats. decorating for dances, and as a girl scout I came here to the White House and sang songs for the senior community. I have so many great memories. A lot has happened since I moved to New York, and I’ve been so lucky in so many ways, but tonight is the highlight.

I want to thank my Mom and Dad for being here and for choosing Barrington in 1959 as the place where they wanted to raise their family. And here we all are tonight, my family, my old friends, and my new. Thank you so much, it’s a huge honor. The front doors of Barrington’s White House were decked out for Cynthia Rowley’s arrival, compliments of Morgan Mehalic.