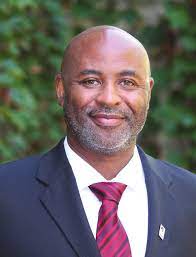 Barrington School District 220’s first-ever Director of Equity, Race, and Cultural Diversity Initiatives will give our community an overview of the district’s Vision for Equity and discuss how it is supporting leaders with professional development focused on the importance of culturally relevant teaching philosophies.

Rouse was born in Chicago and at five years old, he moved with his mother and three siblings to Elgin, where an early teacher told him that people who looked like him (meaning Black children) were either dead or in jail by the time they’re 25. He did not let those words define him, instead persevering thanks to a sixth-grade teacher who helped turn things around in his early educational environment.

After high school graduation, Rouse became the first person in his family to attend college, which he paid for by enlisting in the Illinois Army National Guard. He went on to start his career as an English teacher at West Leyden High School, then became a dean of students in District U-46, an assistant principal at Highland Park High School, and the first Black principal at Oak Park & River Forest High School before coming to Barrington.