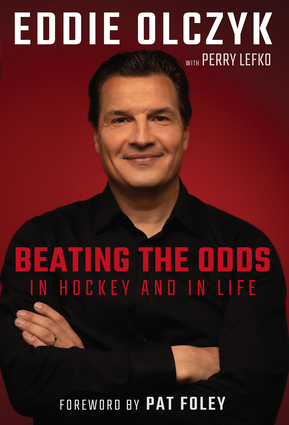 Are you a Blackhawks or hockey fan? Do you have kids who play hockey? You don’t want to miss Hockey Night in Barrington with Eddie Olczyk.

Join us on Monday, October 21st at 6:30 p.m. to celebrate “Hockey Night in Barrington!” Meet with Blackhawks legend and USA Hockey Hall of Fame inductee Eddie Olczyk. “Eddie O” will give a talk highlighting his time playing elite youth hockey in Chicago, as well as his NHL career with the Blackhawks, Maple Leafs, Jets, Rangers, Kings, and Penguins as both a player and coach. He will also speak about his post hockey career as the color commentator for the Blackhawks, nationally for “Wednesday Night Rivalry Night on NBC” and handicapper and analysist for Kentucky Derby, Preakness Stakes, Belmont Stakes, and Arlington Million.

Finally, he will touch on his recent battle with colon cancer and how that battle has helped him look at life and helping others. At the event there will be a raffle for 2 tickets to an upcoming Blackhawks game. There will be time for a Q&A, so bring the questions you have always wanted to ask.

After the talk, Eddie O will hold a meet and greet and autograph his new book “Beating the Odds in Hockey and In Life.” The book will be available for purchase for $28 at the event. Wear your favorite Blackhawks jersey and get a discount on the purchase of a book.