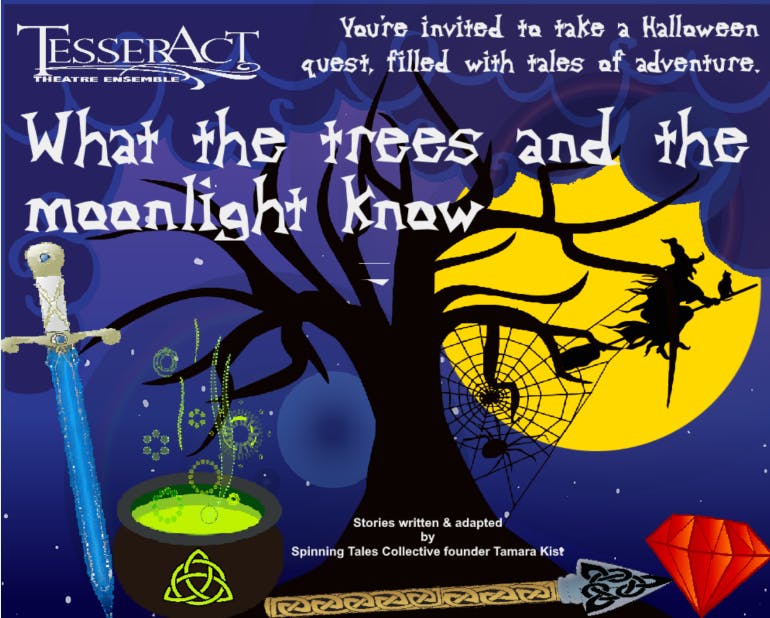 What the Trees and Moonlight Know: Tales of Witches, Monsters and Marshmallows the TesserAct Theatre Ensemble Halloween Show for Children

Enter the forest on Halloween Eve to hear the stories only the trees can tell, with some help from the moonlight and TesserAct’s Spinning Tales Collective. Wear a costume, bring your favorite blanket and pillow and get ready for a storytelling treat. This engaging performance is perfect for children up to middle school age.

TesserAct also performed a Summer Show in Barrington’s Memorial Park, called A Midsummer Night’s Dream, Flipped! It was a swapped adaptation of Shakespeare’s classic comedy. The flipped part was that Oberon, not Titania, had the love potion sprinkled upon his sleeping frame, because this time The Queen of the Fairies held all the power.

The name of the company, TesserAct Theatre Ensemble, TATE for short, was inspired by Tamara Kist’s favorite book from fourth grade, A Wrinkle in Time, by Madeleine L’Engle. In the book a “tesseract” is defined as a gateway to other dimensions, a wrinkle, if you will, allowing you to cross from one place to another, one time to another, in no time at all. Framed in this way, Tamara felt theater could be experienced as a portal, capable of traversing time streams, traveling to alternate realities¾taking audiences places they might never go on their own, both physically and emotionally¾and a new theater company was born.