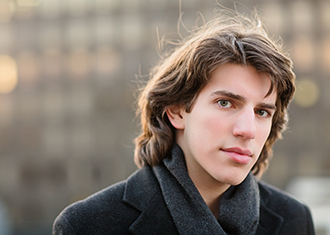 Back by popular demand!  After a mesmerizing concert at Barrington’s White House in 2019, the “poetic and electrifying” sounds of this young virtuoso pianist will fill our intimate venue once more. A Gilmore Young Artist award winner, Llewellyn Sanchez-Werner has performed at the White House and the Kennedy Center, as well as in a multitude of international venues. You’ll revel in his playing, which has been described as “balancing earthly aggression against elegant refinement.”

Llewellyn’s performance for this evening will be:

The phrases “mesmerizing artistry and extraordinary ability to communicate,” “masterful technique,” “exquisite lyricism,” “a gifted virtuoso,” have lauded Llewellyn Sanchez-Werner for performances that have stirred the intellect and humanity of his audiences on five continents. His unique and multi-faceted artistry has been featured on NPR, CNN International, the Wall Street Journal, and WDR-Arte. Named a Gilmore Young Artist, an honor awarded every two years highlighting the most promising American pianists of the new generation, it held deep meaning for him to perform at the White House and Kennedy Center for President Obama’s second Inauguration concert. Renée Fleming, Eric Owens, Marina Poplavskaya, and Cynthia Phelps are among the leading artists Mr. Sanchez-Werner has collaborated with as an active chamber musician.

General David Petraeus has commended Mr. Sanchez-Werner’s “courageous humanitarian contributions through the arts…strengthening the ties that unite our nations.” He received the Atlantic Council Young Global Citizen Award recognizing his dedication to social action through music in such countries as Iraq, Rwanda, France, Canada, and the United States.

In addition, Mr. Sanchez-Werner performed Beethoven, Mozart, and Haydn concerti in partnership with the National Academy Orchestra of Canada and the New West Symphony in 16 concerts for 20,000 North American students to excite more youth about classical music. He continued his work with conductor Boris Brott with performances for an additional 6,000 students as part of an anti-bullying campaign.